1 POSTS 0 COMMENTS
Shreyansh Ojha is MA History and a sports enthusiast. He is also a pro boxing writer at Sportskeeda. 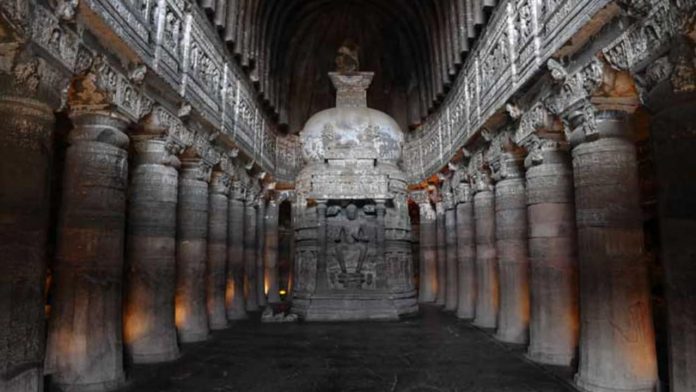 India is the country where the oldest religion of the world originated. It is also home to Buddhism and Jainism. The Vedic religion based on Vasudhaiva Kutumbakam is bigger and beyond the concept of religion. The great Max Mueller described it as essentially a way of life and the fountainhead of all knowledge.

The religious sphere and its widespread knowledge had its impact on almost every sector of human activity including the mural and miniature painting, temple architecture, sculpture making and cave architecture. The architecture based on religious orientations had a long-lasting impact on the forthcoming generations and still continues to inspire the imagination of the masses. Here we will have a look at the prominent caves and their architecture in India. Every section of tourists finds them as a perfect treat to the eyes.

Buddhism is not just limited to ‘Astangika Marga’ or ‘Dharmachakrapravartana’. The religion of Buddhism had its long term impact on the cave architecture of India. Buddhism has inspired the majority of cave architecture in India. Ajanta is among the UNESCO designated world heritage sites of the world. Both the Hinayana and Mahayana form of Buddhism had its contribution in the Ajanta Caves which is built on a steep slope. It is basically a collection of 30 Buddhist cave monuments. The fine paintings illustrating Lord Buddha’s previous births mesmerize most of the tourists. This site is the majority of interest to the tourists coming from Sri-Lanka, Myanmar and China where Buddhism is the most prominent religion. If you have connections with the spiritual sphere of life then Ajanta caves are a must visit for you. They are marked as a protected site under the Archaeological Survey of India.

Ellora caves are known for their diversity. It is basically a collection of 34 cave architectures. 17 of them are Brahmanical in origin. It also has a collection of 12 Buddhist and five Jain caves. So it attracts a share of tourists from all the three major religions of ancient India. Various guilds of Karnataka and Tamil Nadu built and developed them between 5th and 11th century AD. Ellora caves reflect a natural diversity of themes. The famous ‘Kailash Temple’ is also a part of it. Ellora is also among the list of the UNESCO world heritage sites of the world.

This site comprises of five Hindu and two Buddhist caves that trace back to the period between the 5th century and 8th century. The Hindu caves of the site are dedicated to Lord Shiva. The rock-cut sculptures of these caves represent the Shaiva Hindu sect. Cave 1 is also referred to as the Great Cave of Elephanta is the most imposing of this site. It is famous for its remarkable sculptures that illustrate the gradually developed Brahmanical rock-cut architecture. The site is presently maintained by the Archaeological Survey of India and is also marked as a UNESCO World Heritage Site.

Nasik Caves are also known as Pandav Leni. It is a group of 23 Buddhist Caves. It belongs to the Hinayana period of Buddhism which is against idol worship hence no images of the Buddha is present. Though the motifs and symbols in the caves indicate the presence of Lord Buddha. It was carved between the 1st century AD to 3rd century AD. It is one of those areas which is yet to fulfil its tourism potential. A perfect go to place for Mumbai weekend getaway.

Bagh Caves are architecturally similar to Ellora. The group of nine rock-cut Buddhist monuments forms the Bagh Caves. They are famous for their mural paintings which were done on hard surfaces by the master painters of ancient India. It is located on the banks of Bagh River in Madhya Pradesh. Bagh caves have been losing its significance because of the neglect by the administration. Currently, only five of them are surviving for visit. But the scenic beauty is hard to ignore as it is the combination of the banks of the Bagh River and cave architecture resulting in perfect delight.

Also known as Montperir Caves. It was developed in the 8th Century AD as a Brahmanical cave. Later they were converted into Christian religion importance. It is one of the latest addition in the cave architecture of India which has mighty potential in the tourism sector. The name Mandapeshwar means ‘hall of the lord’. This cave had been the resting places for soldiers during the world war which adds to the significance of this site. It is a blend of ancient history walking hand in hand with modern history.

Cave Tourism is a delight to both architecture and adventure tourists. And it does not end here. India holds a lot for every kind of travel enthusiast.