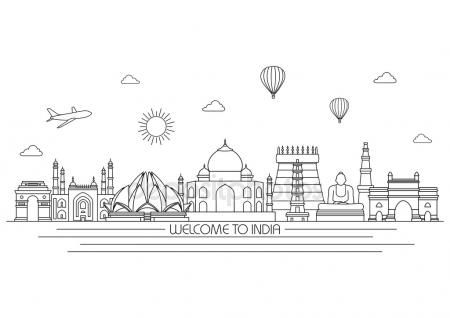 India is a vast country with diverse landscapes and topography. It is an amalgamation of different aspects such as rich heritage, deep-rooted history, varied culture, and numerous languages. Though, India is well-known for its multiple scientific and historical wonders. But there are many hidden gems that allow visitors to experience an array of revered sites. Discover some historical treasures of India. Let’s take a look at some of the most amazing historical wonders this country has to offer.

Taj Mahal- Wonder of the World!

It took more than 2 decades and 20,000 artisans to construct this ivory-white marble structure. One of the biggest mausoleums ever constructed, this symbol of love of Mughal Emperor Shah Jehan for his beloved third wife Mumtaz Mahal. It is truly one of the most iconic places in India. It is not only one of the wonders of India but also the world. This stunning masterpiece is one of UNESCO’s World Heritage Sites. Millions of people visit this magnificent wonder to admire its intricate carvings and outstanding architecture. Though it is open throughout the day, seeing the Taj Mahal at night bathed with moonlight is a magical experience.

Located in Karnataka, Hampi is a spectacular temple town and is one of the most visited places in South India. Part of the ancient kingdom of Vijayanagar, it was one of the wealthiest cities in the world. Moreover, with 100 plus locations to explore, the striking relics and ruins of the temple leave its visitors awestruck. The Queen’s Bath, Virupaksha Temple, Archeological Museum, Monkey Temple, and the Vittala Temple Complex are some of the most iconic monuments in Hampi. There is no doubt that this marvelous temple complex makes it to the list of UNESCO World Heritage Sites.

Built-in the traditional Kalinga style of architecture, the Konark Temple is situated in the coastal region of Orissa. Constructed by King Narsimhadeva I of the Ganga dynasty, this majestic temple comprises of 3 depictions of the Sun God, with elaborately carved pillars, wheels, and walls. The sundial is fascinating with seven horses pulling 12 wheels, and has all reasons to be in the list of wonders of India. It is used to predict the time of the day with the help of sun rays and moon rays falling on it.

A new and impressive addition to the list of outstanding monuments of India is the imposing structure Statue of Unity. This colossal statue is 182 meters in height and is a tribute to Sardar Vallabhbhai Patel, also known as the ironman of India. Built-in the vicinity of the Sardar Sarovar Dam on the Narmada riverbed near Ahmedabad, this is the tallest statue in the world. It offers panoramic views of the dam and the Satpura and Vindhyachal mountain ranges from its visitor gallery.

Located in Amritsar, the Harmandir Sahib temple, famously known as the Golden Temple is the holiest and revered pilgrimage sites of the Sikhs in the world. It is open to people of all religions and thousands of tourists visit this beautiful temple every day. Built on a manmade waterbody the façade of the temple with the dazzling golden dome and gold covering the upper floors of the temple looks brilliant, especially when illuminated at night. The temple houses the holy book of the Sikhs called the ‘Adi Granth’ and the ‘Akal Takht’ which means the throne of the timeless one.

Rajasthan is known for its marvelous forts and opulent palaces. But one fort that stands out is the imperial Amer Fort. This architectural masterpiece was built by Maharaja Maan Singh and boasts of attractions such as Diwan-e-Aam, Sukh Mandir, Jai Mandir, and Sheesh Mahal. Strategically located in the hillside, the fort can be accessed on foot or via shuttle rides from the town below. Take a guided tour and explore the curved staircases and maze-like passages and learn about the history of this mind-blowing place.

One of the earliest universities in the world, this Buddhist monastery dates back to the 7th century AD. Many of the ruins found here are UNESCO World Heritage Sites. The university saw its golden days during the reign of the Gupta empire, and later during the rule of Emperor Harshavardhana of Kannauj. It boasts of a flourishing past when scholars from Tibet, China, Persia, and Central Asia came to learn here. Some of the attractions here are Nalanda Archaeological Museum, Hiuen Tsang Memorial Hall, Pavarika mango grove, Surya Mandir, and The Great Stupa.

The above list of Wonders of India does not even scratch the surface of the list of wonders this exotic country can offer. These monuments add glory and prestige to the history of India and woo visitors from all over the world. India is vast and to experience the real colors of India, check out the Tips to take the Perfect Trip of India. So, what are you waiting for? Book your tickets and come and soak yourself in the beauty of these places.